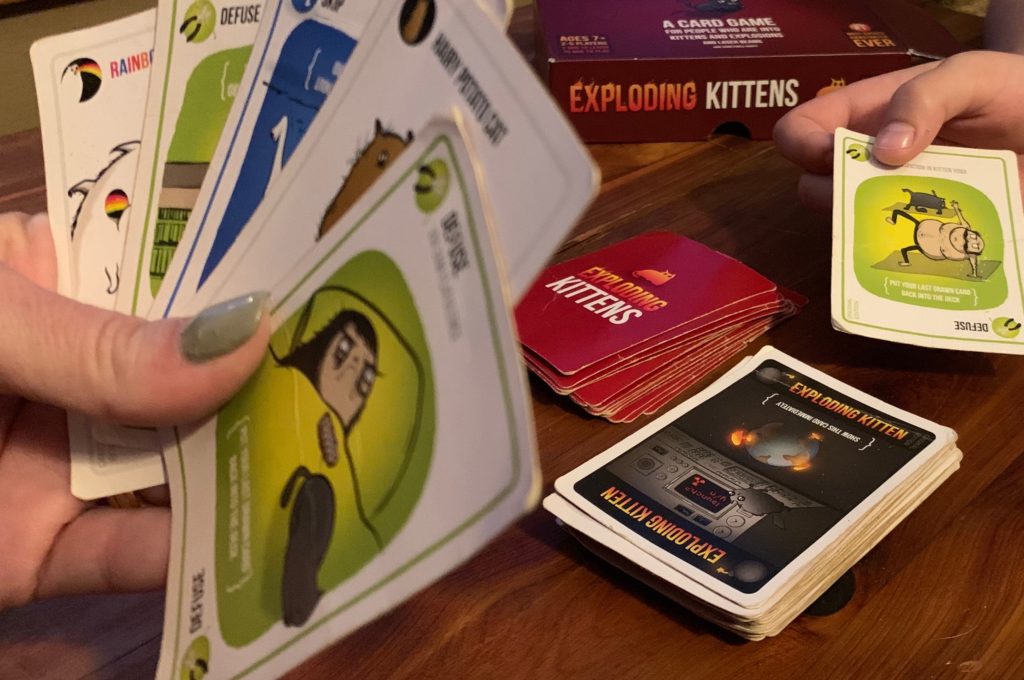 A few years ago our boys started playing the game, Exploding Kittens.  What?  I thought the same thing.  Eventually I sat down and played with them so I could figure out what all the screaming and excitement was about.  The premise of the game is pretty simple.  Each turn you have to draw a card from the deck, and if you pick up the Exploding Kitten card, Bam, you’re out of the game.

But you are also collecting cards for your hand during the game, and if you collect enough Defuse cards, you can hopefully avoid letting the kitten explode.  I’ll admit, it is  pretty fun trying to avoid the exploding kitten, especially as the game gets down to the end and you know it is inevitable.

Having those Defuse cards- cards with special powers- is essential to winning.  They also would be helpful for real life. Do you ever wish you had Defuse Cards handy to help de-escalate an argument with your spouse?   When a conversation is getting intense and you’re not sure how to defuse the situation?  How to keep it from exploding?

For where jealousy and selfish ambition exist, there will be disorder and every vile practice. 17 But the wisdom from above is first pure, then peaceable, gentle, open to reason, full of mercy and good fruits, impartial and sincere. 18 And a harvest of righteousness is sown in peace by those who make peace.

When we are driven by selfishness, we will only reap disorder- but I love the Defuse Cards this scripture gives us: be pure, peaceable, open to reason,  full of mercy and good fruits, impartial and sincere.   Here is how you can put that into action:

If something stupid or untrue comes out of your mouth, take it back.  Even though words can’t be un-said, it’s much better to apologize for them  than trying to defend a stupid statement to the end.

I didn’t mean to say that, I’m sorry.  That was uncalled for.  I only said that because I was angry. That’s not the truth at all.

This one is easier said than done, but it will be worth it! For one moment truly consider your spouse’s point of view and go with him.  Switch sides of the argument. When I first tried this, I thought it would mean my opinion would no longer matter. Instead, once I was willing to switch sides, Joe switched sides and started arguing for my viewpoint.  (So, in some ways the argument continued so does this really help??  LOL?).   Once we didn’t have to argue for our side, we were able to come to a solution together when we both respected each other’s opinions.

You know what?  I think you may be right.  Let’s do it your way.

A fight will continue to escalate as you each plant your feet in the ground and defend your sides.   Become a peacemaker by reminding each other that you are on the same team.

I bet we’re more on the same page about this than it appears. I think the fact that we’re seeing this from two different angles is good!

Speak what is good rather than speaking doom and gloom over your relationship.  I know an intense argument is discouraging. But speak life into your marriage by telling your spouse that you want the best for your marriage and that he is worth it.

We’re going to work through this and we’re going to be okay.  I believe we are better than this and that God will help us.  I know this is frustrating but this disagreement won’t destroy us.  In fact, this will make us stronger in the end.

The longer your argue, the easier it is to make your spouse the enemy.  Throw in a small, random act of kindness to remind you and your spouse- that they are not the enemy.   A small act of service can remind you that no matter how much you disagree, or how much you argue, that you do care.  Feeling cared for is a great defuser.   (In our marriage, it’s usually Joe offering to fetch me a box of tissues:)

Do you need a sweater?  Are you thirsty, can I get you a drink?

When you’re arguing, it’s natural to physically separate- and even stop making eye contact.   When Joe and I find our anger growing, soft physical touch can make a difference in softening our attitudes.  A long, gentle hug- no talking- can help ease the tension and soften your heart.

Can we hug for just a minute?  Let’s stop talking for a minute so I can hold you.

By saying you don’t want to fight- or have to win- can de-escalate a conversation.  You’d think this is obvious but how easy is it to assume that your spouse wants to fight with you?  Chances are they don’t want to argue and stay upset forever.  Let go of those defenses and say so!

I don’t want to be at odds with you.  I don’t want this issue to get in the way of our connection.  I want us to be okay.

Sometimes in an argument, we make wrong assumptions and think we heard something that we didn’t.  The argument can take a completely wrong turn all based on something that wasn’t even said.  (Speaking from experience, y’all!). Before you race to take offense or correct your spouse, ask them to clarify what they just said and what they mean.

I don’t think I’m understanding what you’re saying.   Can you explain that again so I don’t misinterpret your words?

What defuse cards do you use to de-escalate an argument?