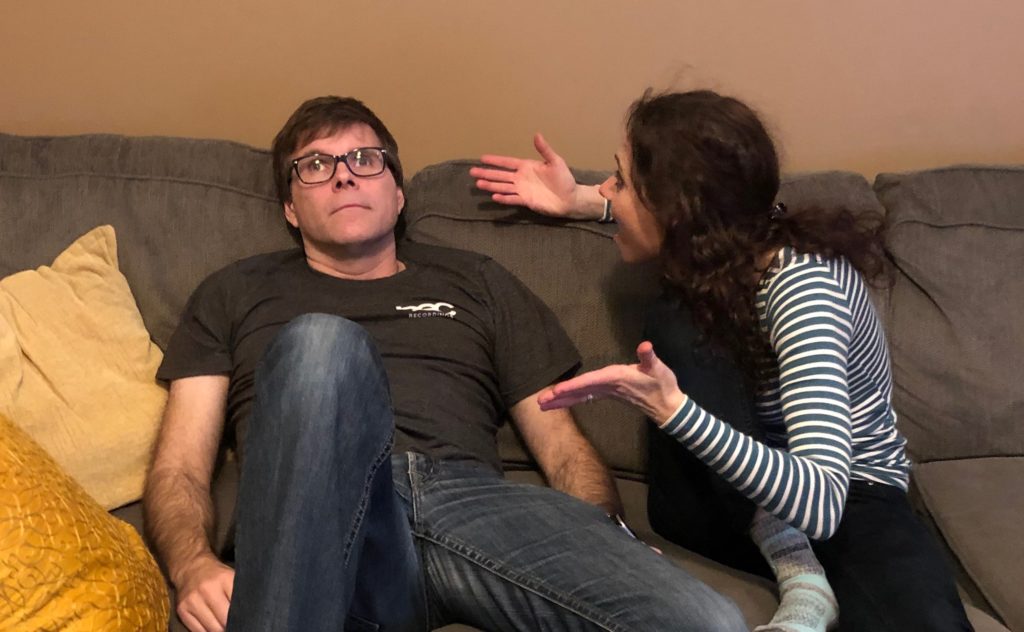 Ladies, how many times have you been asked to or begged to let it go?

From my anecdotal experience, this is a woman thing but feel free to switch the pronouns!   We’ve been there countless times. Joe and I see something differently.  Maybe we have a conflict and we talk about it, and Joe feels the issue is resolved, but it’s still bugging me, so I keep going.  We discuss, we listen, apologies where necessary.

Joe then asks me to let it go because he feels like the conversation is going nowhere and we’ll just talk in circles.

Joe, meanwhile has Moved. On. And he feels content with our discussion, he’s good and he has no idea why I would want or need to discuss anything further.

But can I say just two more things?  I see the look on his face.  He’s done. He makes the ask again.

What if you can’t let it go?

But maybe I can. I began to surrender the issue to God and let Him search my heart.  It was a slow and painful surrender filled with many “buts”.   What was the secret to this magical ability to let it go?

The truth was, I did have a choice.  To hold on and fight for control, or surrender to God and say, God, you got this.  My life will not come crashing down if I let this one thing go.

When I could submit my heart and attitude to Christ- the pride that says it needs it to be my way melts away.  I began to see my husband’s point of view and give him benefit of the doubt.  It is only when  I let go of the need to control, I could truly love and offer grace.

So I tried this last time the situation came up.  The situation was trivial enough that I don’t even remember it now.  We were in an intense discussion trying to figure out why I was hurt or he was hurt or something of that nature.  We got to a stopping point in the conversation, Joe is at his capacity and says we’re good and we can let it go.

Instead of fighting the let-it-go and staying upset about the whole conversation, I gave it my very best try to try this thing which I previously thought could not be done.

I still didn’t feel better, by the way.   I still felt kind annoyed by the situation and that somehow I had agreed to drop it.  Was that really a good idea?

But in that short time afterwards, within 15 minutes, the ‘feelings’ soon followed.   Ah, I’m not nearly as annoyed as I thought I was, Ah, now I understand what Joe was saying.  Yeah, not now I see how not letting it go would have made things worse.  A little space there was helpful.   I think we’re going to be okay.  Little by little I got there.  Letting go felt good.

What he was really asking of me was to respect his boundaries.

I had to listen to what Joe was saying he needs.   Was it true that I had already told him what I thought and he didn’t need to be re-told those things a few more times?  Perhaps.  Was I really just walking all over him by not letting it go?  Double perhaps.

I realized that Joe is in a much better pace to discuss things with me when he has some space and he knows I will respect his boundaries. Ouch.

“Let it go” still trips us up from time to time.

As I’m learning to let it go, oh-so-still-learning, Joe has also learned how to lean in and figure out where I’m coming from.   Instead of just snapping the phrase  out of nowhere, he asks politely.  (Really, him changing his tone made a huge difference!)  And then if he sees I’m not okay with it, he’ll reassure me that we can pick up the topic later.  So I know it’s not that he doesn’t care, but just he needs a break.  Adding the little “for now”- to “let it go” made a huge difference!

Joe saw that some of my crazy was also fueled by my desire to be heard and understood.  When he goes out of his way to communicate that to me, I feel much more willing to let it go. As we both seek to meet each other’s needs, “let it go” trips us up less and less often.  Small disagreements can stay small disagreements.  We can avoid the talking in circles 🙂

Get to the heart of your refusal to let it go.  What exactly are you holding on to?  I think that is such a crucial step to learning to let it go!  And is whatever that is, is it more important that showing love and respect to your spouse?  Even when we have to address tough issues- even for those conversations that should not be simply dropped- always start with a surrendered heart before God.  He gives us the strength to lead from love and not control!

Psalm 94:19/When the cares of my heart are many, your consolations cheer my soul.

Proverbs 19:11/ Good sense makes one slow to anger, and it is his glory to overlook an offense.